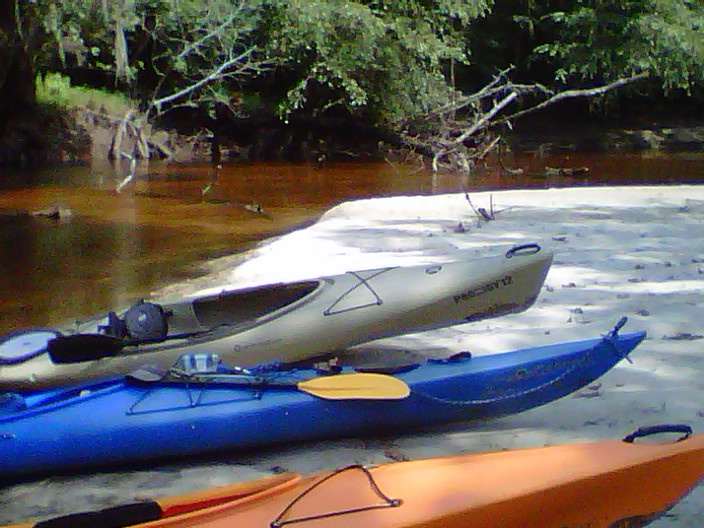 Kayaking on the Black River / August 11, 2010
Yesterday, James MacLaren, Joseph (my son) and I spent the day paddling the Black River from Ivanhoe Road to Beattys Bridge.  I was not quite sure what to expect on this trip, since this was my first adventure on the section of the Black River.  You know the feeling, will the effort to get there and paddle this section be worth all that I have heard and read about this paddle.  It was only a 3 hours and 35 minute float, so it could not be so bad.
As we drove to the launch site, the hot steamy summer weather of Southeastern North Carolina was kicking in and somehow I know it was going to be HOT!  Yet we were rewarded with a beautiful river with plenty of opportunities to pull over and enjoy the shade of large trees.   The Black River is formed by the confluence of Great Coharie and Six Runs Creek, just south of Clinton, North Carolina.  The South River flows into the Black just south of Ivanhoe.  Eventually the Black flows into the Cape Fear River just north of Wilmington.  The Black River has been known for excellent water quality and was designated as an Outstanding Resource Water Resource in 1994.
As we began our adventure, the first thing that we noticed was the beauty of the surrounding forest that the Black River flows.  We saw numerous large bald cypresses that would have taken all three of use to stretch our arms around.  Cypress swamps are an amazing part of the eco-system.  We tend to think that they are a damp dark place, but they play an important part of the local eco-system and are quite beautiful.  The other thing that struck me was the number of white sand bars that there were along the river.  Yesterday the river was low, due I guess from the lack of rain over the past several months here in, southeastern NC.  But even at normal water levels there would be many sand bars to enjoy on a hot day.
Wildlife was abundant along this section of the river.  We saw wood ducks, a wild turkey, several huge great blue herons, numerous other birds and even one alligator. The good thing is that he saw us coming before I spotted him, and he started heading the opposite direction from where we were headed.  (In all honesty, gators pose very little danger to kayakers, not unless you start messing with them)  We also saw numerous alligator gar fish.  These fish are ancient fish that have a leathery skin and have a snout that looks like an alligator snout.  I guess that is how they get their name.  We saw several that were at least the length of my arm.
All in all, this was a great place for all levels of paddling.  I even located a few excellent camping spots on some bluffs that over look the river.  I have to remember these locations for a future overnight kayaking trip.