Ah, what comes to your mind when you hear about someone going backpacking? I am not sure about you, but I think about experiencing God’s created world and all its natural beauty and wonder. My most recent adventure with my son, Lawrence Lee and his son Joe was no different.

Our adventure began early on December 20th as I was driving to pick up Lawrence and Joe. It was a cold frosty morning here in Wilmington and the weather forecast for the next three days was going to be “Cold”! It was not the first time I have been backpacking in cold weather like this, but this was going to be the first time for the other three on this trip. I could not help but wonder if Lawrence and his son followed the instruction I had given them about how to pack for a cold weather backpacking trip. I made sure my Joseph had packed everything he many need, without bringing too much.

The challenge with cold weather backpacking is that if you pack to little, the cold will hurt you and place you at greater risk of getting hypothermia. On the other end of the spectrum, it is carrying too much extra clothing and supplies. This mistake will keep you warmer, but carrying all the extra weigh will make the hike very unpleasant. There is nothing like being too cold or carrying about 30 pounds more than needed and I wanted to avoid both.

Anyway, after our 3 hour drive to the Uwharrie Forest, Woodrun Trial Head just to the west of Troy, NC, we were ready to begin our three day adventures. The sky was clear and we had a cold wind blowing steady from the NW, so we were anxious about getting on the trail to get warmed up. After about a mile of hiking, we pulled over at a nice stream crossing to adjust our packs and for a quick drink of water. After about 10 minutes of adjustments and arranging items in our packs, we were back on the trail hiking. We hiked another mile and half and found a nice large flat area overlooking a forest service road below. This spot was perfect for lunch.

It is amazing how good a simple trail lunch can be when you are in the outdoors. Some granola, gorp, cheese, some crackers and summer sausage make a great filling meal. I really enjoy backpacking in the winter months because you can carry some food items that will not spoil. Summer sausage is one of them. In the colder month, you can enjoy items like this without fear of spoilage. Anyway, we enjoyed about 40 minutes of rest and conversation before we got our packs back on to head out. I was quickly reminded how your muscles can tighten up over a short lunch break.

Now began the real work with our first real climb of the day. The Uwharrie Mountains are more like foothills when compared to the Appalachian Mountains further to the west. But to flat land folk like the four of us, these mountains might as well been the real thing. What made this even more interesting was the trail was covered with a large amount of fallen wet leaves. These wet leaves make the trail somewhat slippery if you were not careful. It was a good thing that there was no ice on the trail, which would have been even more fun. We did see a few places that had some remaining snow from the storm the week before.

I wanted to get to camp quickly this day since this was the shortest day of the year. I was expecting it to get dark quickly after the sun went down. Usually in the winter months when the sun goes down, the temps drop quickly and I expected tonight to be no different. So I wanted to get to camp with enough time to get set up and gather firewood. A fire tonight would be greatly appreciated. So my main focus this afternoon was to keep everybody moving and not wasting too much time. I have experienced getting into camp late on cold afternoons like. It is not much fun rushing to get everything set up, gather firewood, get the fire going and starting dinner. So I wanted to give us as much time as possible to enjoy the evening.

The four of us made it to the first Dutchman Creek campground around 4:10 pm after a 7 mile hike. Lawrence had fun when he took off his pack in camp, showing us his moon walk. Granted, he is no Michael Jackson, but it was funny, well at least it was to me. We quickly set up our tents, stored our gear and started gathering firewood. It is amazing how much a good fire can warm a person. Not only did our fire provide some much needed warmth, but also some great light to finish up cooking our meals that evening.

Today was not only the shorted day of the year, but we also found out that there was to be a full lunar eclipse very early the next morning. It was a first for me to be camping on a lunar eclipse and I was hoping that I would be able to see this wonder. The night was clear and cold. Soon after the sun went down, the “Frost Moon” as the December full moon is called, was up. Wow, it is simply amazing to see how bright the moon can be on a clear night like this. We were able to walk around camp that evening, hang our bear bag and anything else we needed to do without the use of our head lamps. If you have never been in the outdoors on a night like this, you will never be able to appreciate how bright it was.

The moon was so bright it was had from me to go to sleep this evening. Usually I don’t have a hard time falling asleep, but I did this night. I laid there in the tent for what seemed like an eternity listening to the silence of this night. The only thing that I could hear was the soft sounds of the creek that we camped next too. No owls to sing me to sleep tonight, not even the rustling of the leaves by the wind. Sometime later I must have fallen asleep, because I remember waking up in the middle of the night, thinking the lunar eclipse was in full swing. The brightness of the night had faded as if the moon were not out. So I was sure that the eclipse was in full swing, but it was in full swing elsewhere, because here it was behind a thick blanket of cloud cover. Darn!

The next morning came quick enough. It had warmed up a few degrees because of the clouds, but it was still cold. So it was to my best interest to get up and get moving quickly. As we got moving around fixing breakfast, I began hearing and feeling something hitting me and the ground. It was sleet! Nothing new, I have had this happen before, but this was a first for Lawrence and Joe. The sleet lasted for about 10 minutes and then passed by. We didn’t get much, but it was cool to see Joe’s expression on his face as we were preparing breakfast.

This morning we had a decision to make. The day before, my son slipped on some slick leave and fell directly on his knee. He was not hurt bad, but this morning he was very sore and stiff and could hardly walk. The section of trail that we were to take this day was more rugged than we covered the day before, making this a concern for me. So after a group meeting we decided to backtrack to Big Island Creek campsite we hiked past the day before. We could day hike out of here while Joseph remained behind in camp. So that is what we did. Remember, when out in the wilderness, you have to be flexible and adjust your plans according to the circumstances that you have at the moment. When you fail to do this, problems will arise.

So, slowly off we went making it to our new camp 2.5 miles away in just over 90 minutes. Slower that I would have liked, but the time traveled was good since we had a bum knee in the group. We quickly set up camp and off Lawrence, Joe and I went day hiking. It is amazing how much more ground you can cover when you are not lugging a 40 pound pack on your back. After about 3 hours of day hiking, we made it back to camp to find my son, stretched out on his camp map taking a nap! Teenagers!

After gathering firewood and pumping water for the evening meal, we got a fire going once again. Joseph’s knee was still stiff, but he had no problem building a nice fire with Joe. Once again we were in business with a warm glowing fire to gather around for fellowship and some dinner. There is something about sitting around a fire in the great outdoors. Something peaceful and relaxing; something that allows your mind to wonder and settle down; to simply enjoy the moment before you. Now add to the mix a few toasted marshmallows, some graham crackers and a Hersey chocolate bar (hum, I wonder what that makes). These moments simply become magical. 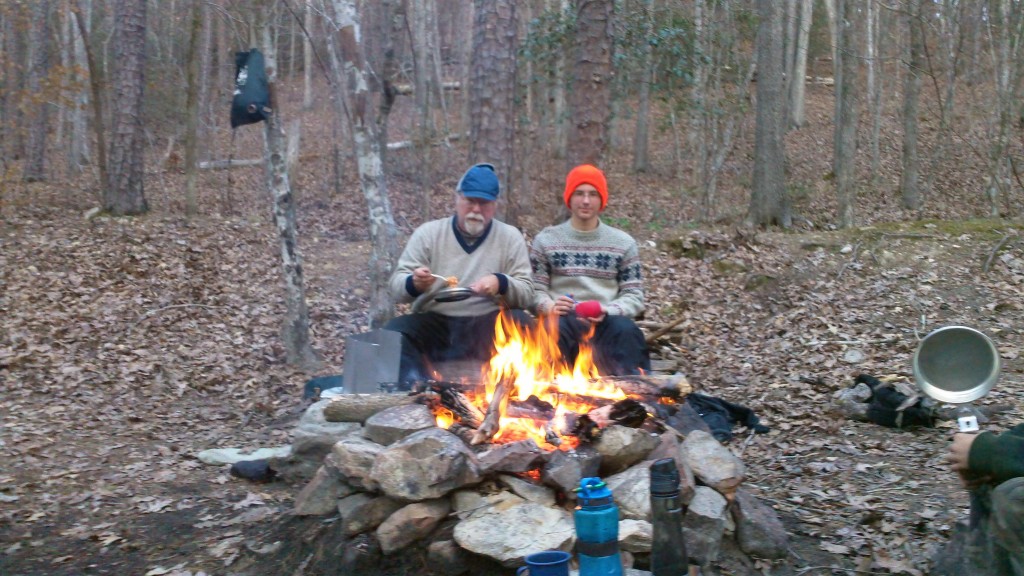 The next morning, Joseph was up early and ready to go. It was funny watching him give the countdown to the time we were to be on the trail. It was almost like watching a rocket lift off at Cape Canaveral. Anyway, the morning was still cold and cloudy with a chance of partly cloudy day ahead. We had an easy 4.5 miles to hike out this morning, so we know we would be on the road home before noon. I think Joseph and Joe were more interested in getting to a Subway to get “Real” food for lunch.

All in all Lawrence and Joe’s first backpacking adventure was a huge success. I have always enjoyed spending time with my son on adventures like this and with good friends. I felt that I had accomplished my mission; it seemed as if Lawrence and his son had a wonderful time. Joe even said that he would do this again. That is good news. It was also good to hear that my son had a good time despite his knee problem and his first desire to stay at home and sleep the Christmas holidays away.

If you are up for creating a memory and an adventure for you and your son or daughter, let me know. It would be a privilege to help you create such a memory for you!